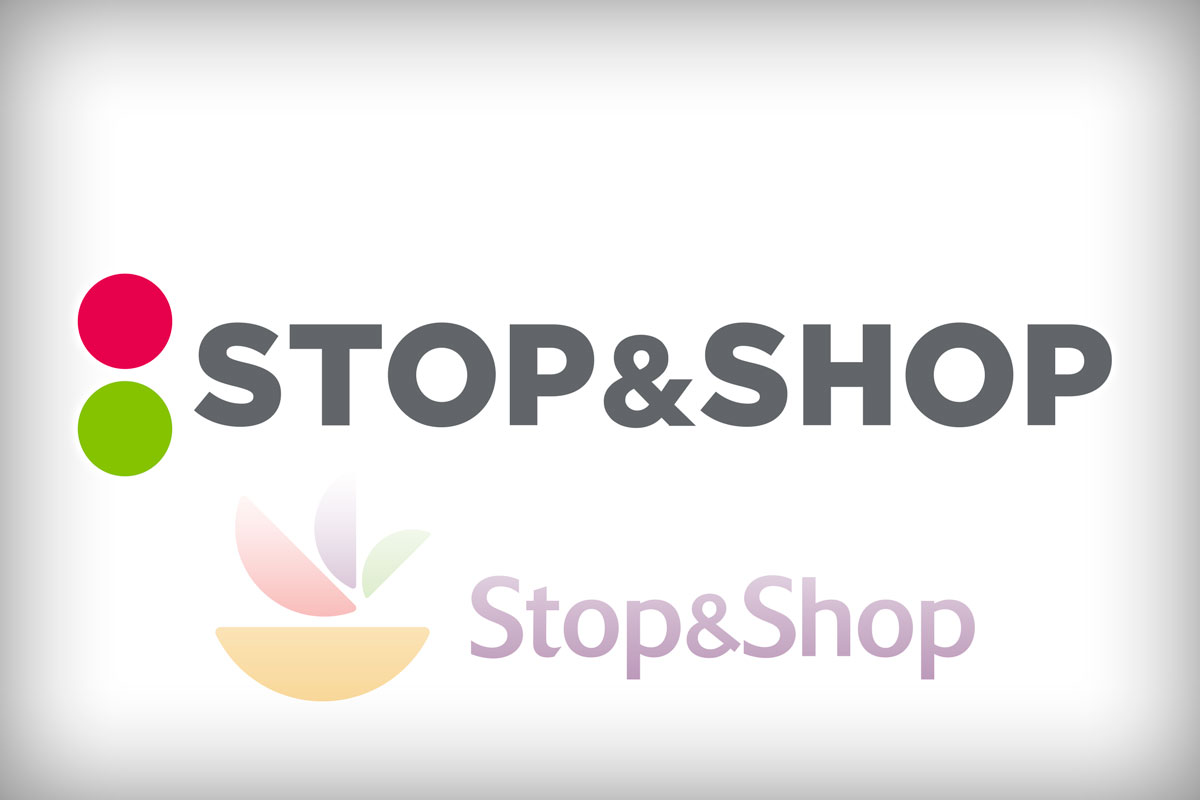 Stop&Shop Supermarkets have decided—or more accurately, their parent company Ahold Delhaize have decided—to once again change the supermarket chain’s logo and branding. This comes barely a decade after making a drastic change from a red and green stoplight logo to a more colorful, modern, somewhat abstract “fruit bowl” design. So what’s the new design?

The Stoplight is back! This will probably delight many who thought the change to the fruit bowl wasn’t so great. After more than a generation (namely mine) of the stoplight, some found the change to be an unwelcome departure from an iconic fixture in their lives. New ownership (Royal Ahold) was coming in and mucking around with something that had been a Massachusetts staple for a long time. Some thought it looked like a weird bird, or else couldn’t figure out what it was supposed to look like at all.

The Stop&Shop logo had gone through some transformations in the past. The stoplight first appeared in the 1960’s and evolved for forty years before being “end-of-lifed.” Shoppers were very accustomed to the stoplight, and slogans like “It’s time to stop & shop.” The drastic change could be somewhat jarring to more sensitive customers, and even to loyal employees who felt that Stop&Shop was like part of the family.

The change away from the stoplight was part of Ahold’s effort to show consistency between Stop&Shop and their Giant supermarket brand further south. Except for the name, it was a complete overhaul of the brand, more “revolution” than “evolution.” Personally I was OK with the change. It seemed like a refreshing new direction, even though Stop&Shop has been a linchpin of my very existence. My parents met while woking there. It was my first job. Most of my current friends worked there, as did family, and some still do. Some might be very protective and resistant to change, but I don’t mind trying something for a breath of fresh air.

Though I just recently discovered the change in the Boston area, this rebranding has been going on since 2018 when it was rolled out in the Hartford, CT area. It will be accompanied by an overhaul of the shopping experience as well, bringing new offerings and services that the ever-changing customer should find valuable. It’s anybody’s guess as to how some of these new experiences will survive the COVID-19 crisis, in particular the self-serve olive oil and vinegar blending stations and kombucha fountains.

One might ask, “What’s the big deal? It’s a supermarket.” It’s no significant change to our daily experience, but there are profound psychological effects that come with any change, and the public response can be unpredictable.

When consumers accept a brand as part of their daily lives, over time we might begin to feel some sense of ownership and get protective. When such a brand is changed, there’s a natural inclination to feel like this change is being forced onto us whether we like it or not. In reality, it makes no real difference to our lives (unless the company makes major changes to how they do business as well), but we are not always well equipped to handle change, even cosmetic ones.

Consider the folks who get protective of the names of streets and public venues. When there was talk of changing the names of Yawkey Way and Faneuil Hall, many people bristled at the idea. Much of the opposition was simply feeling like “this is how it’s been my whole life, so why do they have to change it?” Others were concerned about a slippery slope of erasing history to satisfy the modern-day sensibilities of a subset of society.

There’s always risk involved with changing something that works (if it aint broke…) but sometimes change is good. Sports teams have been rebranding away from old racist stereotypes. McDonald’s golden arches have been around a long time, but that wasn’t their original logo. Sometimes updating a brand is less of a rebrand and more of a tweak to change with the times. Stop&Shop’s new stoplight design certainly brings back an old concept, but the design is slightly more simple, clean and modern than the previous incarnation.

What does it all mean?

So is this change back to a stoplight an admission that the previous brand change was a mistake? Their press release shaped it as “…a nod to the brand’s past…” but it certainly could be read as “yeah it was better before so we’re just going to erase the last ten years.” The new logo isn’t identical to the one from the late 20th century, but it’s clearly a reversion to that previous concept. Popular opinion was mixed, but the stores didn’t suffer any major downturn as a result of the fruit bowl.

If the 2008 rebrand is being declared a failure, it could be a lesson in rebranding strategy; a cautionary tale about taking an axe to a recognized and, dare I say, beloved brand icon. I think the lesson is that any change brings uncertainty. It could all go wonderfully, or it could be an unmitigated disaster, or somewhere in between. Sometimes you just have to take the chance and commit to the decision, but at least in this case, it looks like Stop&Shop is doing a return. I hope they kept the receipt.

Is your business considering a rebrand? Charles River Creative can help!

Find out how Charles River Creative can help your business look its best!

Whether you need an on-call graphic designer, a printing quote, or an entirely new brand package, Charles River Creative is your turn-key marketing solution.