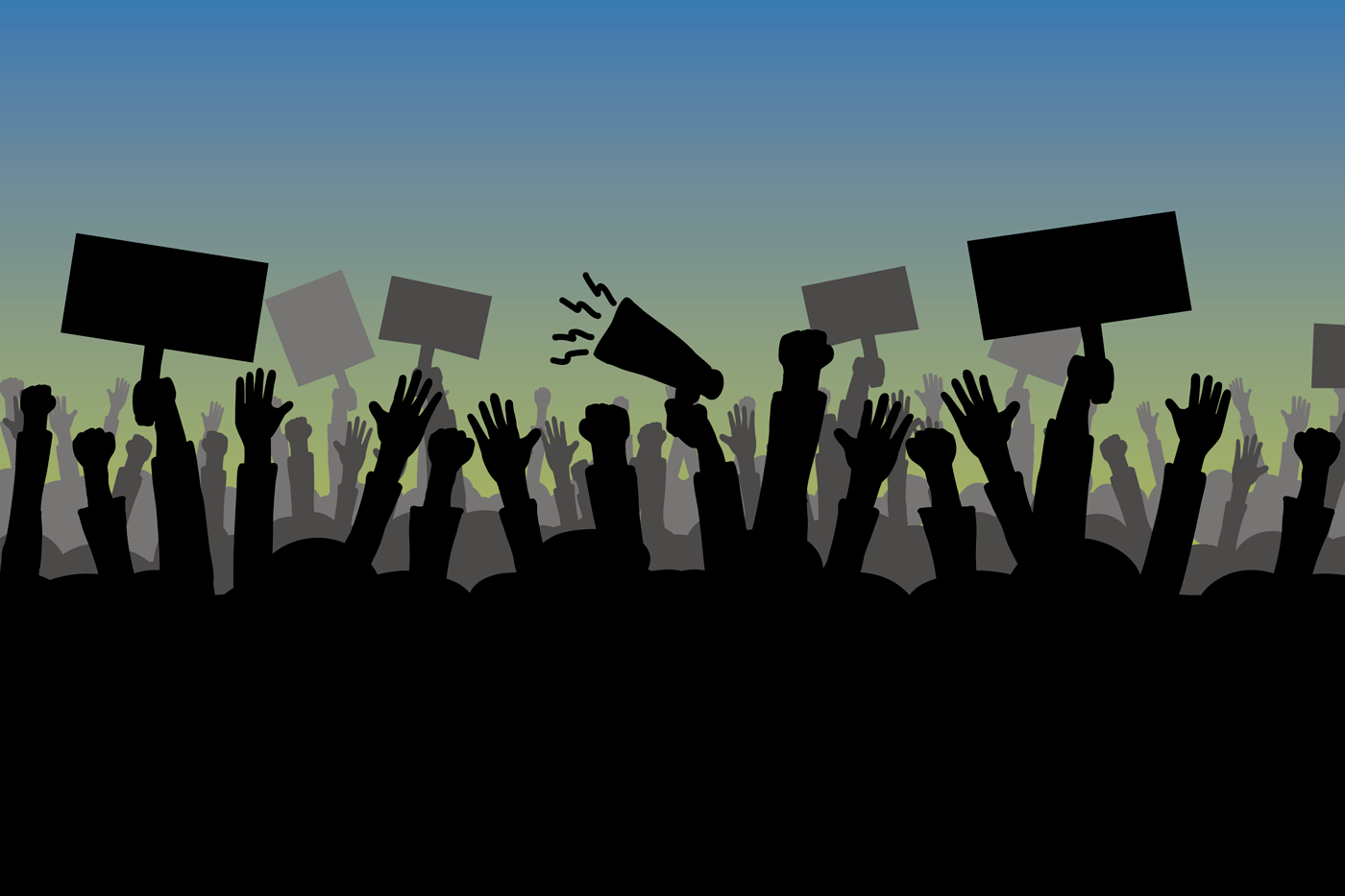 If you’ve been using Facebook, Twitter, Instagram, or one of the myriad other social media platforms over the last several years, you may have come to realize, in this hyper-political, professionally-outraged era, that branding—while important for businesses—is also important for movements. This is largely because social media and 24-hour news coverage has turned what might once have been simply a chant or rallying cry into a hashtag and a logo.

In a day and age when we should be enjoying flying cars and actual hoverboards, instead we sadly find ourselves still fighting the same battles we’ve been fighting since our country began. Racism and intolerance still plague American society, and the Information Age has turned all of us into on-the-spot reporters ready to capture and transmit the worst of human behavior.

We are also constantly available to react to such revelations, and in the heat of the moment, we might naturally have extreme reactions, especially when the news is colored with opinion to get us riled up. These reactions are very personal and emotional expressions, and usually not intended to be adopted (or co-opted) into widespread use; but social media enables us to share thoughts faster than the civil rights protesters of the 60’s ever though possible, and when enough people express the same feeling, you just may have inadvertently spawned a movement. And once you’ve spawned a movement, like it or not, you’ve spawned a brand.

We all maintain our own personal brand, the version of ourselves we want everyone else to know: what we like and don’t like, what we stand for and stand against, the traits and qualities by which we want to be judged. This brand may be exaggerated, such as “I’m an active, open-minded, philanthropist,” or completely honest, as in “I’m a couch potato, set in my ways, and I donate the change at the cash register.”

These outward characteristics, no matter how honest or disingenuous, are how we try to present ourselves to the world in order to gain the acceptance we desire. Everything we do or say, especially in the age of social media, becomes part of our brand. Examining one’s own personal brand may even reveal some surprising truths we never knew about ourselves.

Everything consumed by us humans has a brand whether we realize it or not. Commercial products certainly do. Broad commodities don’t necessarily have their own brand, but a brand image can be assigned to them by consumers who have a way to broadcast their opinions. For instance, if you think “Big Oil” is killing the planet, you’ve consumed the brand image of large oil companies as bad actors among society, an image certainly not created or endorsed by the oil companies themselves. Celebrities have a brand to maintain, sports figures, political leaders… it’s the personality they want the public to consume; the way they want people to think of them when and if they do.

The intention may be different in a social justice movement, but just like in a business, the message sent by its branding must be clear and focused to be effective. The message is often boiled down to a few words, a catchy slogan that’s easy to remember, easy to repeat, and easy to swallow, just like a business slogan. It doesn’t leave much room for error, so “social justice warriors” must be careful to craft a message that doesn’t cause confusion.

Black Lives Matter is a phrase that seems straight-forward, and if you’ve been watching the news and consuming social media, you know what it means. Yet some still manage to misunderstand it, thinking it means to place the lives of African Americans above those of other ethnicities, and those same people respond with “All lives matter,” which misses the point of the branded phrase entirely. This was more common when the brand was first used, but even after several years of its existence and many, many blog posts of explanation, it still spawns confusion.

It’s not easy to successfully contain a whole movement’s message in just a few words, especially in a politically polarized society where many people will be naturally predisposed—or programmed by partisan propaganda—to disagree with you, and (often seemingly intentionally) misinterpret and warp your meaning. A social change movement will automatically gain widespread support, but also face widespread opposition, and the brand message must clearly get the point across to both parties.

A more recent movement that may or may not have the staying-power of Black Lives Matter is #DefundthePolice. The movement quickly sprung up in reaction to the continued use of excessive force by the police against American minorities. A quick read of the hashtag might suggest that the intention is to remove all public funding for police, leaving them unable to function, painting all police departments and officers as bad actors that should be eliminated. This is a radical notion, but is it the true meaning of the movement?

For some, maybe, but for most, the real intent is to reduce police overtime and increase funding for other social services that are better equipped to handle special situations, rather than asking already overworked police departments to respond to every disturbance. Meanwhile in Minneapolis, the City Council has actually voted to disband the police and create a new model for public safety. Time will tell which method proves most effective, but regardless, the hashtag leaves a lot to be interpreted. It may in fact be worthwhile to reexamine public safety methods and create innovative, new models that work better for everybody; but the hashtag #DefundthePolice might be hard for many Americans to get behind, as it suggests drastic action to eliminate something that brings to many people’s lives a sense of security. It’s difficult to get people on-board with destroying an institution as omnipresent as the police.

Branding is Persuading People to Join Your Cause.

Across America, millions of people have very strong feelings about abortion: the right to life versus the right to choose. The organization Right to Life’s mission statement is, “…to protect and defend the most fundamental right of humankind, the right to life of every innocent human being from the beginning of life to natural death.” This is a broad way of saying they’re against abortion, while also leaving the door open for other interpretations.

As with any movement, fervent activism only goes so far. To really power a movement, it’s all about the money. Donations are a huge factor in the success or failure of a social change movements. If you’re counting on money to come in to fuel your cause, your brand needs to look solid enough to inspire the confidence donors need to feel sure that their money won’t be wasted. If they’re going to part with their hard-earned cash, they need to trust that the organization it goes to is for real. Branding goes a long way to build that trust.

Right to Life’s branding looks professional. Their website looks professional. A supporter looking to join the fight and support the cause will most likely have the confidence that this organization will make good use of their donation. With many pro-life organizations to choose from, one might argue that as long as you support any one of them, you’re doing your part; but if you’re running an organization and want to gain power and influence for your cause, you want your brand to win those hearts and minds.

It all comes down to persuasion. Whether selling a product, or inspiring social change, the message matters. You’re trying to influence others to think as you do, to act as you want, and to produce an outcome that is desirable to you. There’s an art to crafting a message that makes your intentions unmistakable. It can be very easy to send the wrong message, and fail to persuade the people that would have helped accomplish your goal; but also to inspire opposition, and open a pathway to those who seek a way to undermine you.

As we descend further into a constant flood of tweets and soundbites, succinct wording becomes ever more important. Every public statement we make, especially those recorded and broadcasted over media, come with branding whether we mean it to or not. Today it’s more important than ever to say what we mean, and say the right things, even if hundreds, thousands or even millions of people say it together.

The Message Matters! If your business or organization needs help sending a clear signal, Charles River Creative can help.

Find out how Charles River Creative can help your business look its best!

Whether you need an on-call graphic designer, a printing quote, or an entirely new brand package, Charles River Creative is your turn-key marketing solution.